Jason Gold, a Colorado dad of two avid woom Riders, shares in his own words about how he’s seen his kids grow and thrive by riding bikes. His kiddos began on balance bikes and are now zooming around bike parks and tackling trails. Follow these and his other adventures @Mr_RadDad on Instagram. Words and photos by Jason Gold.

I remember the exact moment I learned to pedal a bike as if it were yesterday.

I was wildly excited to learn to ride and terrified of wiping out (or flying over the handlebars). A cool guy in my neighborhood helped me learn. He held the raised seat bar as I figured out the balance and rhythm — hands sweaty and gripped to the handlebars with the biggest smile a boy could display.

Now 40 years later, the awareness of that moment floods my senses with the same joy, excitement, and nervous energy I felt when I was a child on my first blue bike with the shiny banana seat and tall chrome seat bar. As a six-year-old kid learning to pedal, that bike was my pride and joy. It wasn’t long before I was popping wheelies and launching neighborhood ramps with baseball cards in the wire spokes making engine sounds. I loved riding my bike. It was the source of countless hours of freedom, play, adventures, and time with friends.

All these years later, I begin to feel all the emotions of my childhood rushing through me while I think about how much being a father means to me. It’s overwhelming to think about how much love and joy I’ve experienced riding bikes with my children. I always wanted to be a dad, both from the perspective of not having a father in my own life and knowing how impactful having children would be in my life. I always felt destined for it, and now, I understand why. 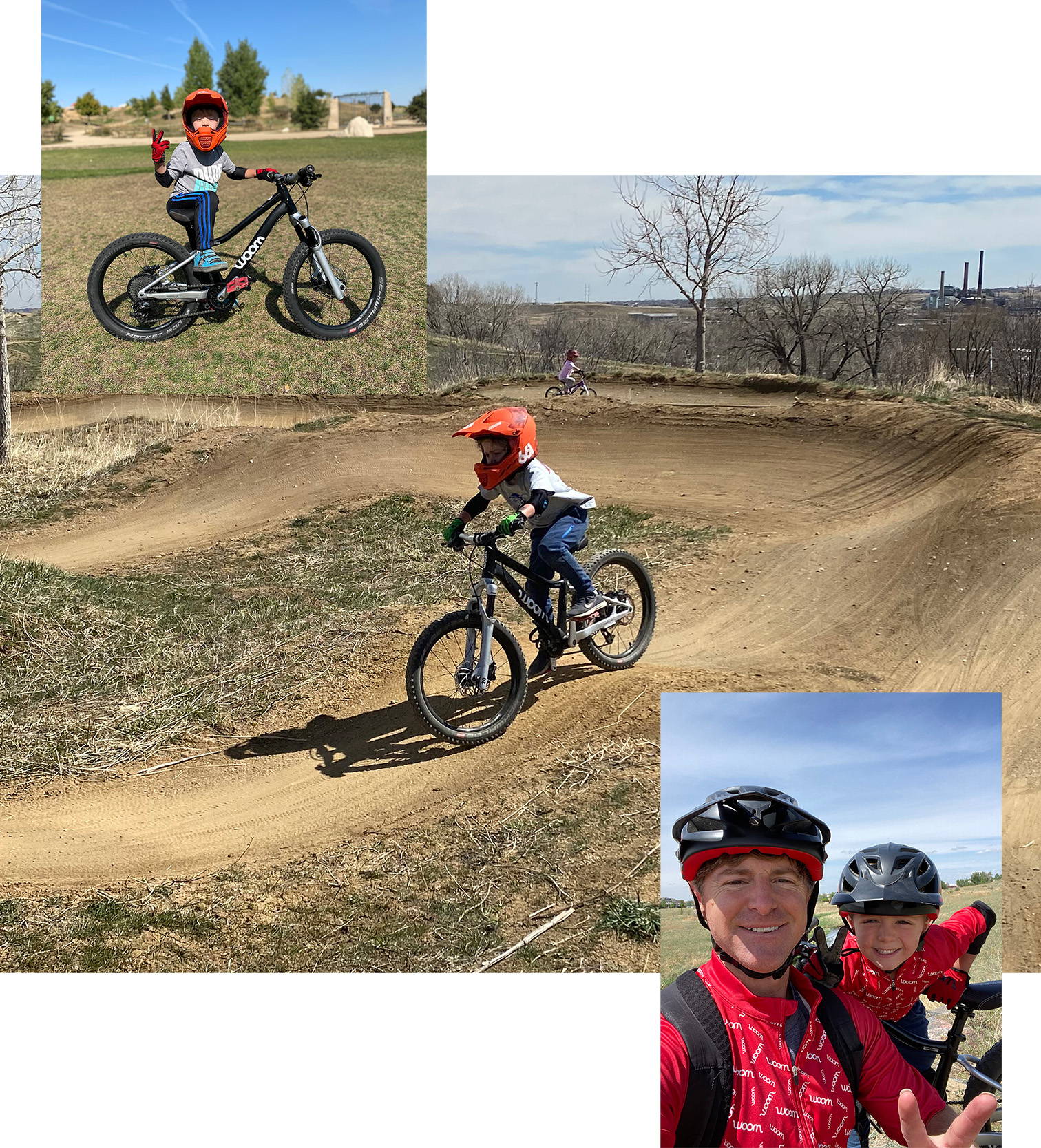 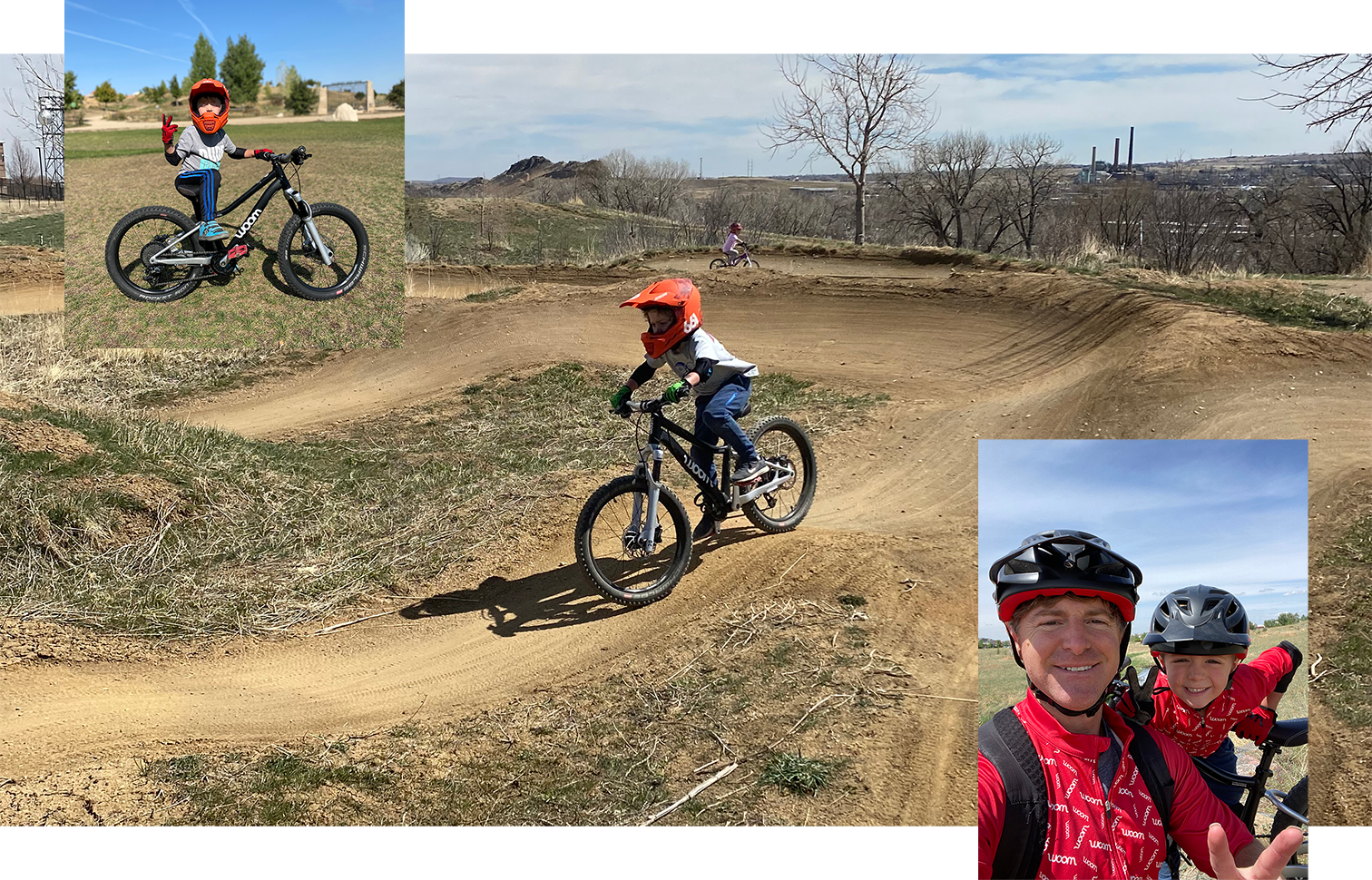 Just as riding bikes as a kid filled my days and childhood with such purpose and enjoyment, my children are now experiencing their own magic moments riding bikes. Only they have the coolest, most brilliantly designed, awesome bikes on the planet: woom bikes.

The joy my kids experience because of woom bikes is best described as radical. They are proud to ride woom bikes. And the happiness on their faces as they show off new tricks zooming past me? Priceless!

My son Grayson just turned six years old, and he’s riding a pedal bike for his fifth (yes, fifth!) season on a bike. He started cruising the neighborhood sidewalks on a balance bike at 18 months old. His little blue balance bike went everywhere with us, and his energetic little legs propelled him everywhere.

One afternoon, when Grayson had just turned two years old, and his confidence on the balance bike was quickly growing, I watched as he decided to push his bike up a gently pitched grass hill beside the raised outfield of our local baseball field. I knew at that moment what he was about to do—and I wanted to allow him to figure it out, so I waited.

Grayson was silently calculating his descent back down the sidewalk. I just watched, mostly in a quiet hesitation for what was to come. He lifted his feet, gave his little bike a push, and soared down the grassy hill.

Unfortunately, a two-year-old doesn’t have the foresight to prepare and plan for the speed and transition from one soft surface to the next solid surface, let alone know how to slow his momentum after speeding down a hill. And so, after a moment of excitement, there was a crash and a little boy in tears.

Grayson was perfectly fine and not injured at all, but he wasn’t free from the pain of knowing he crashed and fell off of his bike. He was crying not from pain or fear of a big fall but from the awareness that he had lost control and didn’t stick the landing. I held him as I brushed off the grass and gravel from his adorable little body and let him cry…until he demanded to ride his balance bike back home.

The very next morning, Grayson asked to pull out his twelve-inch pedal bike. It was made by another brand (not to be named here!), but it was a standard-issue, heavy pedal bike with two wheels and coaster brakes that defy coordination for nearly any two-year-old. And without hesitation, Grayson asked for a hold and a push and began pedaling down the sidewalk. I was speechless, overjoyed, and mostly baffled watching this scene unfold.

My two-year-old was a bike rider. 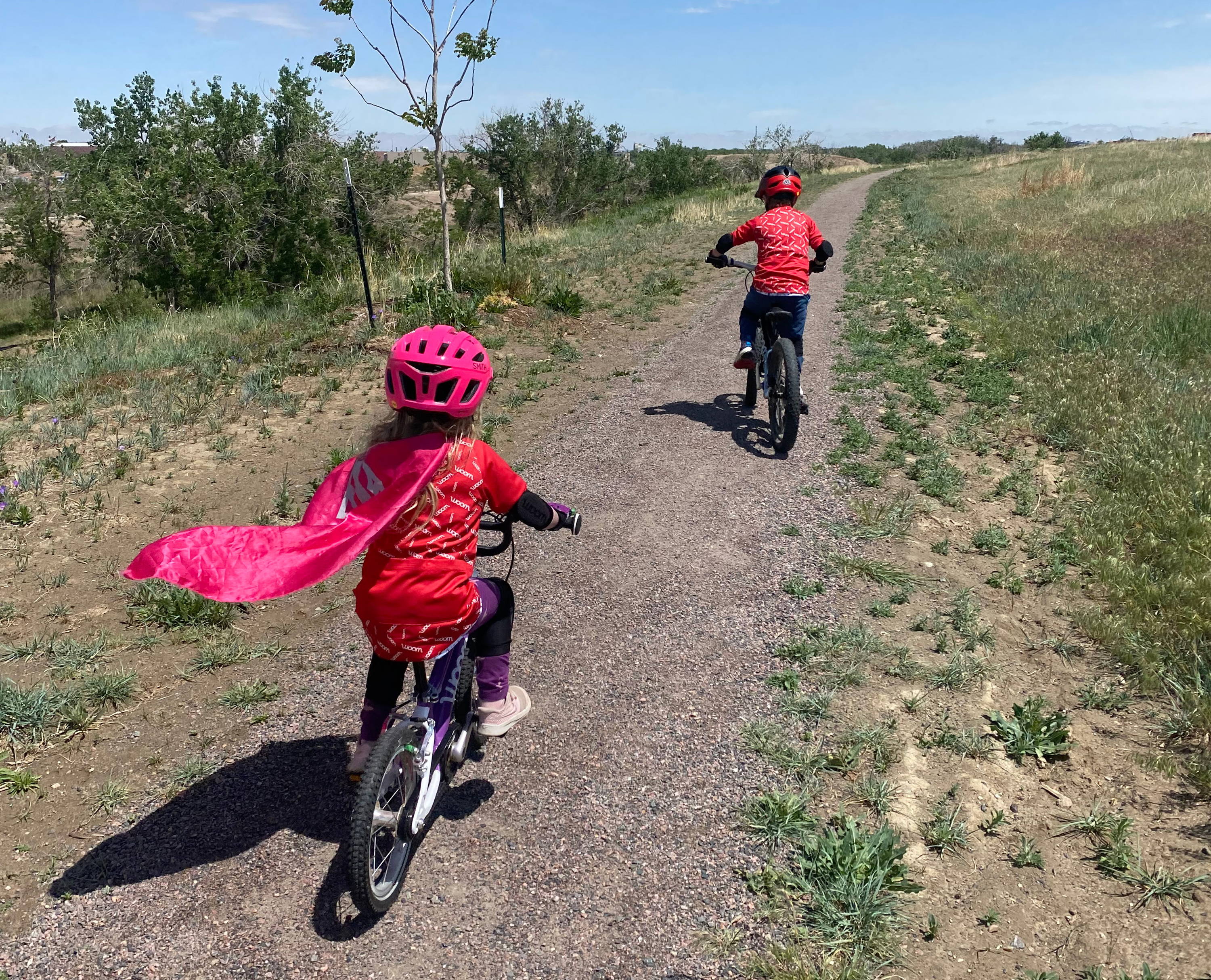 "Bike riding has provided my kids with a sense of confidence and happiness that continues to grow and expand into all aspects of their lives — we’re experiencing challenges, learning, and bonding in moments that we will always cherish."

"Bike riding has provided my kids with a sense of confidence and happiness that continues to grow and expand into all aspects of their lives — we’re experiencing challenges, learning, and bonding in moments that we will always cherish."

Fast forward two weeks exactly, and our very first bright red woom 2 was delivered! Our lives would be forever changed at this moment. From the unboxing experience to the first touch of the perfectly spaced handle grips, we emerged into a new world of being part of a collective. Grayson rode his bike with so much determination and happiness — all he wanted to do was ride. So we rode the sidewalks and neighborhood trails together, and our adventures began to expand to trips to the local bike shop, bike parks, and mountain trails.

My daughter, Harlow, is four years old. This is her second season as a bike rider. She has an older brother who could show her the ropes, and she’s had all our family’s bikes at her disposal.

The day she discovered how to balance and pedal at the same time was another permanent moment of pure excitement. Grayson jumped off his woom OFF 4 and began running beside his sister, cheering loudly. Harlow laughed and pedaled, sharing loud enough for the whole neighborhood to hear — “I can ride a bike all by myself!”

That day, a new bond was formed between a brother and a sister. And talk about a proud dad moment — she was only three years old and pedaling on her own! 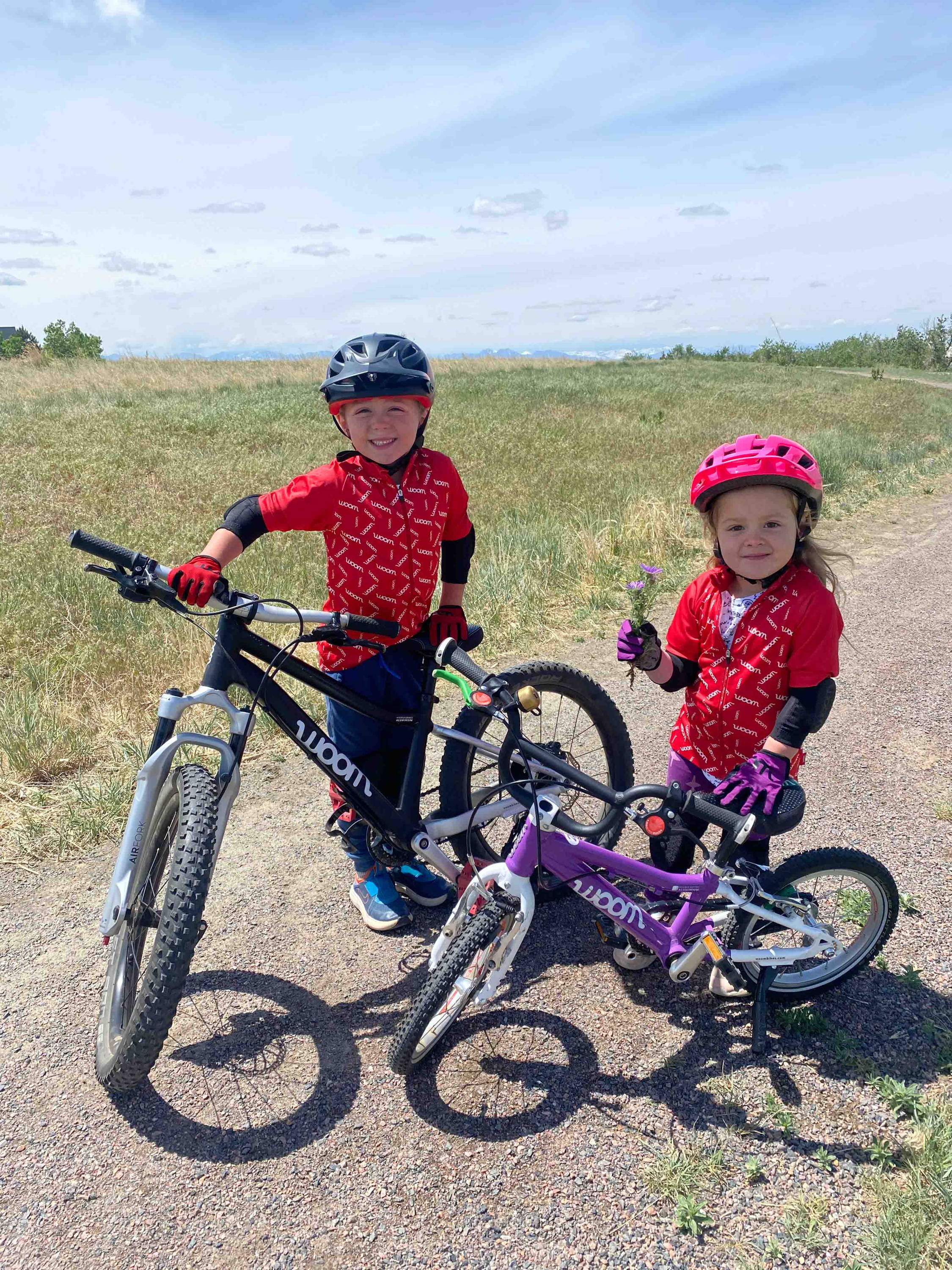 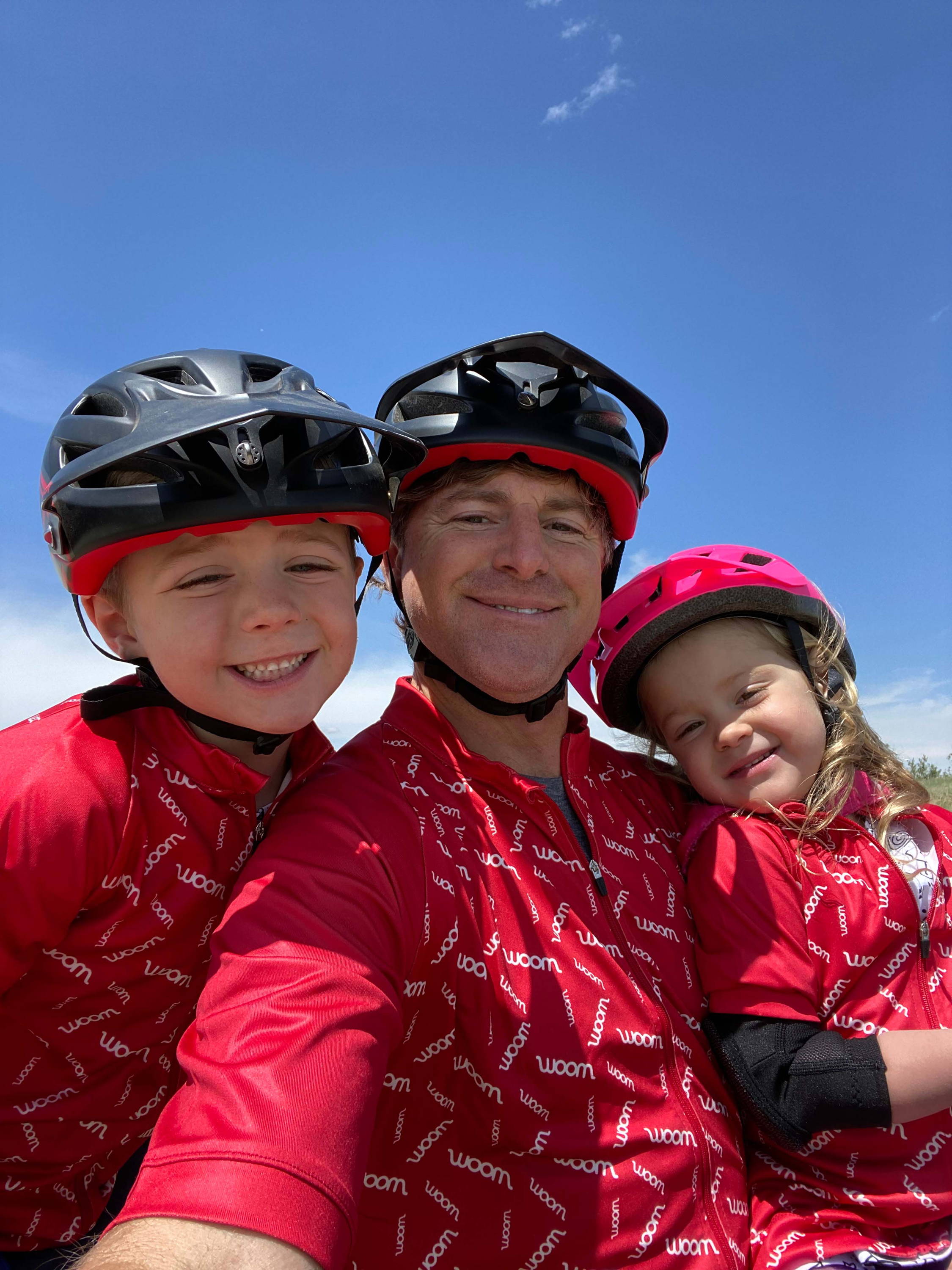 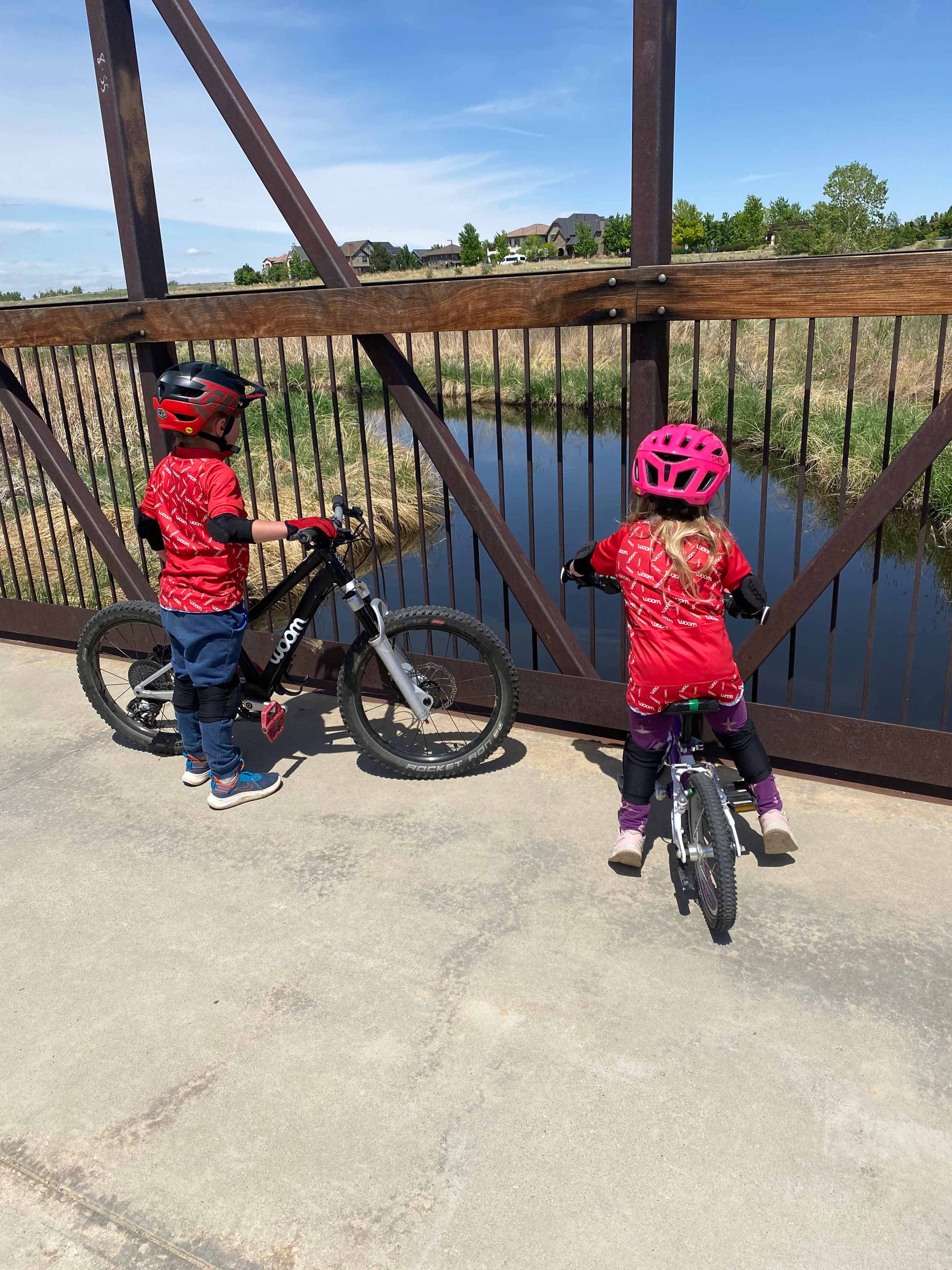 Sharing these moments together means the entire world to me as a father. Now, the moments are adventures spent riding in places we all get to choose together. We ride the long trails, at our favorite bike park, around the skate parks—anywhere the kids choose to ride.

As parents, we often hold onto the days when our kids are more dependent on us. And yes, the earliest days when our kids still needed to be held provided an incredible bonding experience and will always have a sweet place in my heart. But what I experience today living with two confident, strong children filled with autonomy offers endless beautiful opportunities that riding bikes has created. Watching my kids ride has transitioned into riding with my kids. Being able to share these experiences together — even while they’re at such a young age — is truly the best and most incredible feeling.

Having a daughter who will ride her at the bike park pump track with joy and total confidence is something special. What’s even more special is that when she crashes on the small jump course, crying and in a tangled pile of bike and little legs, she immediately asks, “please help me get up so I can try again?” With tears in her big brown eyes, standing tall on her purple woom 2, she launches herself and clears the course of small rolling jumps and immediately rushes over for hugs and high-fives.

This is amongst the coolest dad moments any father of a young daughter can experience. She is tough, confident, resilient, and wants to challenge herself on her bike. I stand back and watch both in awe and complete love with these moments as their proud dad. When she falls, I am always there for her. I am the safety net that allows her to know she can get back up, brush herself off, and go again.

Grayson is six years old and has the strength and desire to ride long and hard climbs with his woom OFF 4. When I’m riding up a steep incline and can look ahead and watch my son pushing his pedals with such confidence and presence, it’s beyond anything I had imagined in the days of holding a newborn child in my arms. Now, there is such freedom to explore and play in all the ways I played as a child; only now, I’m having these incredible experiences with my kids as the proudest dad in the world. 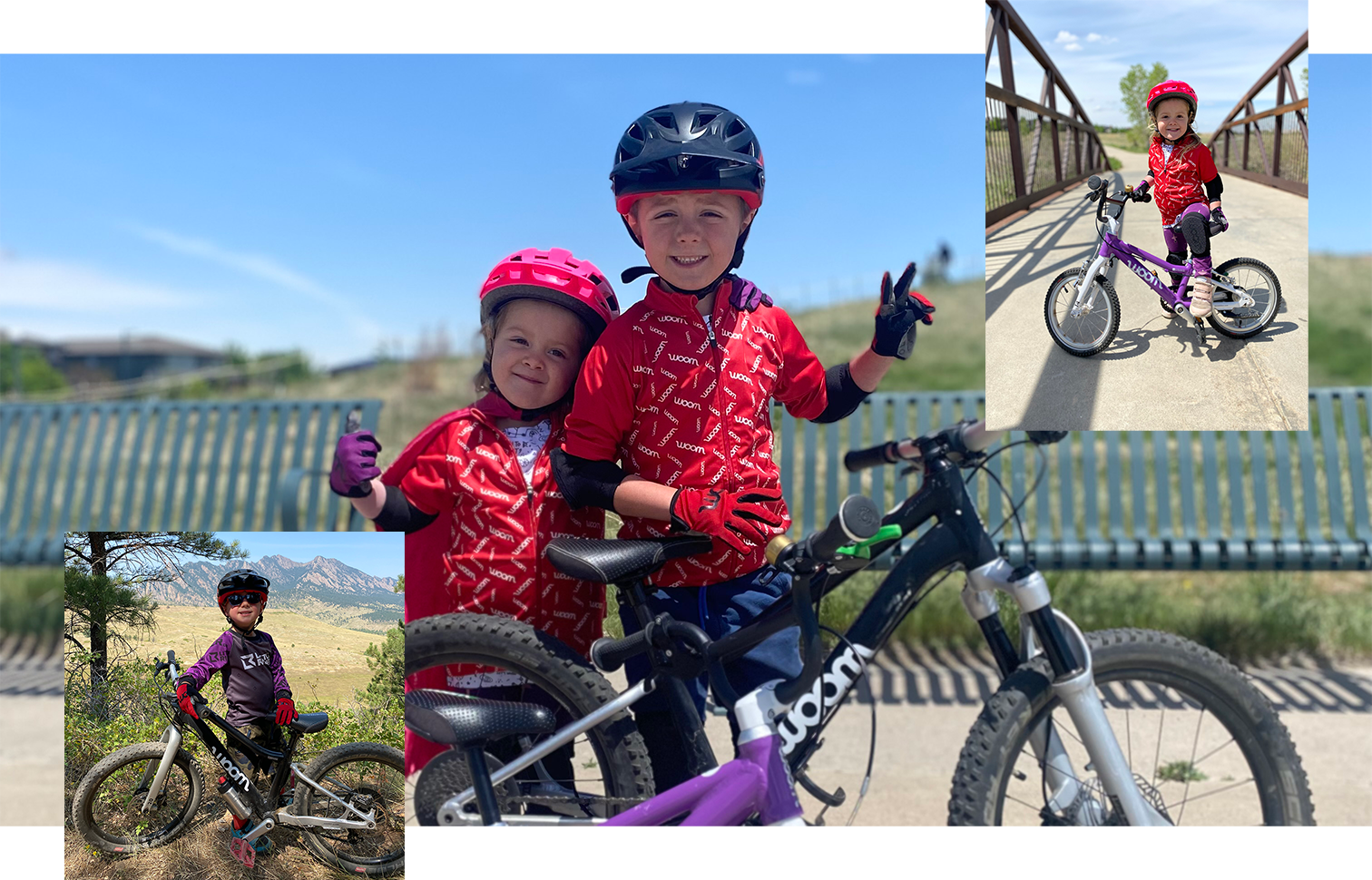 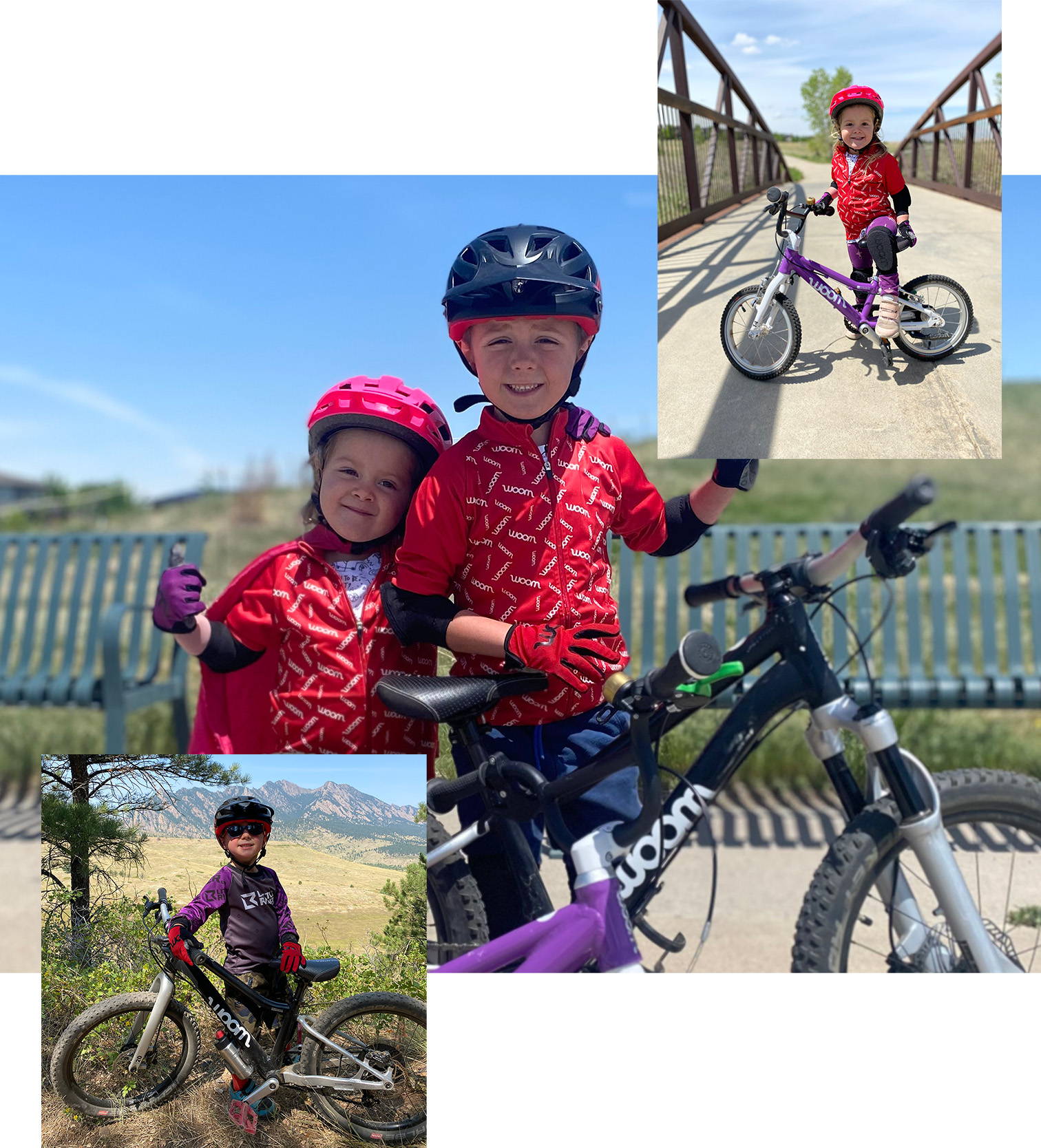 Bike riding has provided my kids with a sense of confidence and happiness that continues to grow and expand into all aspects of their lives — we’re experiencing challenges, learning, and bonding in moments that we will always cherish.

Meanwhile, I get to wear all the many dad hats: bike mechanic, video guy, motivational coach, Band-Aid fastener, water bottle fairy, snack carrier, and the most important of all, as a fully engaged, present, and loving father sharing this exciting woom bike life with my awesome kids.